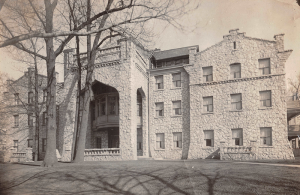 The remarkable success of The Cliffs at Eagle Rock rests squarely on the shoulders of our early founders of The Baptist Home Society in Newark New Jersey. In the early 1890’s, it was the vision of Mrs. John Thompson of Newark to establish a home for the elderly in her community. After visiting numerous pastors and congregations, Catherine Thompson and friends meet in the North Baptist Church of Newark to organize a new charity whose mission would be the care and of the elderly in a Christian atmosphere. By resolution, it was named “The Baptist Home Society of New Jersey.”
A Board of Trustees was elected and Managers chosen from each of the supporting Baptist Churches in the area. The first challenge for Catherine Thompson, President of the Board, was to find a residence to house the elderly. A Home at 179 Fairmont Ave. in Newark was leased to accommodate the first residents of The Baptist Home Society.
The First Annual Report in 1891 noted there were 64 Managers representing 31 Baptist Churches. The Treasurer’s balance was $2,756.85 and the Administrator’s salary was $200.00 a year. A nurse received $72.00 a year and the rent of the Fairmount house was $375.00 for the entire year. The Baptist Home was open for business and was able to care for 24 residents that first year.
In the years to follow, the need for a larger and permanent Home was accomplished by the purchase of a building site on Roseville Avenue in Newark. After careful planning and much prayer, the Ground Breaking took place in 1910. Upon completion, Catherine Thompson laid the cornerstone; she was 87 years old. As a tribute to her dedication and work of 20 years, the Chapel was named “The Catherine Thompson Memorial Chapel. The stained glass windows on the second floor, seen in the picture below, remained an architectural feature for over 90 years. This beautiful new facility on Roseville Ave could accommodate 70 residents and was completed at a cost of $57,000. 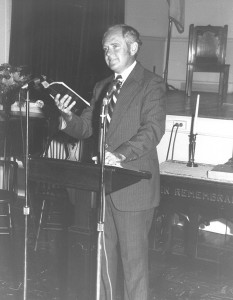 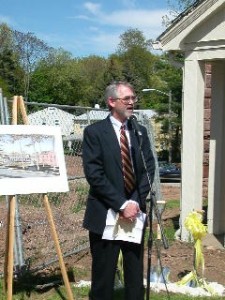 Dave Danton, Architect, presents The Cliffs Rendering to Guest at the Groundbreaking Ceremony 2003

The Baptist Home on Roseville Ave has successfully served senior citizens for over 90 years, through the conversion from oil lamps to electricity, through the blackout and air raids rehearsals of World War II, through the modernization of the kitchen in 1954, and thru the enlargement and improvement of the infirmary. In the 60’s the Baptist Home changed from a Life Contract Plan to a Boarding Plan as aging residents came under the legislation regulations of the Medicare Bill of 1964.

The search for a new site took decades. When the opportunity to purchase the 6.5 acres of a former brownstone quarry on Eagle Rock Avenue in West Orange was presented, the Board of Directors knew their search was over. The Cliffs at Eagle Rock broke ground in 2003. At the Groundbreaking Ceremony, Dave Danton, architect, presented to the Board, Managers, and guests the architectural rendering of the project. The Brownstone Chapel, seen to the right, was the inspiration for the Arts and Crafts architectural design for The Cliffs. The Chapel remains today an integral part of life at The Cliffs. 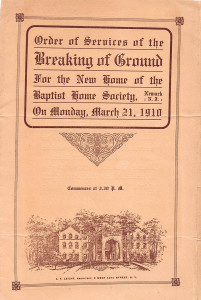 Looking back on its history for the past 125 years, it is clear The Baptist Home Board of Directors and Managers continues in the tradition of those early visionaries whose mission was clear: “to satisfy each of the residents and their families by providing the highest level of care within the context of a loving Christian Community.”